The 2017 theme for National Women’s History Month is “Honoring Trailblazing Women in Labor and Business.” To me, this theme honors women who have broken barriers and chipped off pieces of the glass ceiling for women who will soon follow them – deciding that following their dreams was way more necessary than settling for what society deemed as “proper” for women. To be honest, I don’t think that many of these women even intended on being trailblazers. I believe they just wanted to do what made them happy. Isn’t that what we all want? The first trailblazer that I’m featuring is the very talented Shonda Rhimes. 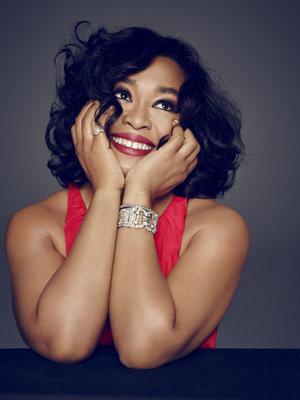 HERstory
I once heard Denzel Washington say, “Don’t speak for your work, let your work speak for you”. So, if you don’t know who Shonda Rhimes is, I can assure you that you know of her work. Can we say Grey’s Anatomy, Scandal, Private Practice, and How to Get Away with Murder?!?! Surely you’ve heard of at least one of these TV shows right? Well, guess what? Shonda Rhimes is the creator, writer and executive producer of all of them. They are all produced under her own production company, Shondaland. Now, how amazing is that!
Shonda Rhimes is a graduate of Dartmouth College and the University of Southern California, School of Cinematic Arts. She decided to work as a writer after leaving the advertising field. She wrote a few screenplays (Introducing Dorothy Dandridge and Princess Diaries 2) before writing the medical show Grey’s Anatomy. Of course, as we all know, Grey’s Anatomy was a hit! So was her next few shows, Scandal, Private Practice, and How to Get Away with Murder. Because of the taboo topics and issues that all of these shows tackled (race, gender and sexuality in particular), Shonda Rhimes has received numerous accolades. She made history as the first African American woman to create and executive produce a Top 10 network series with hit prime time show Grey’s Anatomy!
Inspiration
Though Shonda Rhimes is an amazing business woman who has definitely paved the way for all women, what inspires me the most about her is her unconventional way of thinking which is displayed in all of her television shows. The characters in her shows are racially diverse, sexually fluid, multi-dimensional, and complex people. They’re not stereotypes. The women are doctors, attorneys, and business owners. They have career goals that don’t equate to the typical standards of society. Basically, her characters represent real people. I can say with certainty that she has helped women and men to realize that there is no “one way” that we should be.
Trailblazer
Everything that I stated above is her contribution to women’s history. The National Women’s History Project is honoring women who have “successfully challenged the social and legal structures that have kept women’s labor underappreciated and underpaid”. Has she challenged social structures? Yes she has. As I stated earlier, she uses her platform to go against societal standards by showing that women are more than just potential mothers and wives. We are businesswomen, doctors, attorneys, crisis negotiators, CEO’s, etc. Her life is a challenge to the societal standards of African American women. The fact that she runs 3 or 4 television shows that are shown all around the world through her own production company that is named after her, proves that she has her own standards that she upholds. She is the perfect example of what it means to truly do what makes you happy and ignore what others expect from you. Trailblazer? Most definitely!
Check out these sources for more information on Shonda Rhimes
Biography.com
Year of Yes by Shonda Rhimes

Welcome Y’all!!! I am Dani Smith! Thank you so much for stopping by. I am very excited to share my life as a mother, blogger, and style enthusiast with you. Take a look around! And make sure you come back for more!

5 Easy Ways To Style You Jeans - I’m styling my

Can we get a restart to the weekend? I feel like i

Coffee in one hand. Confidence in the other ☕️

Got a little creative with this scarf that I purch

Told my baby to take my pic, and even though he cu

Have you booked your photoshoot yet? 👀 This is